Today, I got a notification from Play Store, that Mario Run is available for download. Then what, I installed it on my Google Pixel XL and started playing. I have played it before on my iPad and now on Android.

Super Mario Run on Android is beginning on version 2.0, which contains four colored Yoshis as other playable heroes. The Android version gives you a similar pricing style as the iOS launch – it is free to try, but accessing the entire game will need a one-time investment of $9.99.

The company was launched Super Mario Run for iOS devices back in December 2022 with on the launch event of iPhone 7 to cacophonous fanfare and assured an Android version in March 2022.

Mario Run was a quick hit with iOS device users, racking up to 40 million downloads in its first four days of launching to turn out to be the fastest-selling iOS game in the record of the App Store. Actually prepared to come out on March 23rd, the floodgates have opened a bit early. 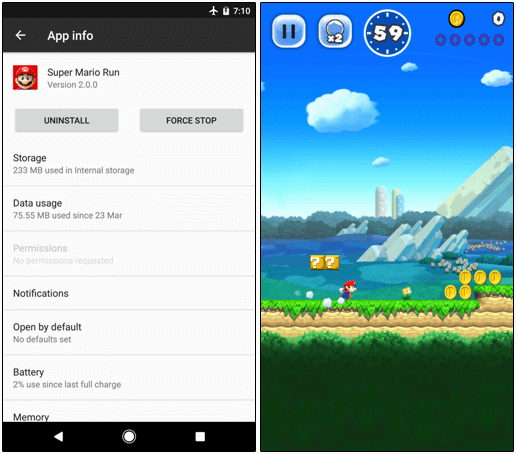 Super Mario Run is an original platformer built with touchscreen devices in mind. The gameplay is still similar. There is an anxiety in the Mushroom Kingdom, and the flame-throwing lizard in his Koopa Clown Car has kidnapped Princess Peach, while also damaging the Kingdom.

In this game, Mario not only has to save the Princess, but also restore the empire and get the toads back. You don’t need to do anything to run Mari. But, you can tap on the screen to make him jump over the challenges and the oncoming opponents.

The game is available in both single and multi-player options. It features 24 levels in its World Tour mode, and you can use Toad Rally mode while playing with multiplayer functionalities.

In multiplayer mode, the more coin collector and enemies Hunter will be the winner. The winner will be rewarded with some gifts.

It takes around 60MB to download from the Play Store. Don’t wait and download Super Mario Run on your Android phone or tablet. You need an active Internet connection in order to play this game. You can’t play the game offline. You can also create an account in this game, if you want to save your score details for future purpose.

The sound of this game is same as the old version. After completing the tutorial stage, it’ll download the entire game.

In my phone, the game size is showing 233MB. To install this game on your phone, you can search on the Play Store or follow the above button. Play this game now and do let us know how the game performs in your Android.