Xiaomi is a Chinese mobile manufacturer, and it is the world’s 4th largest smartphone maker. The MI phone has MIUI interface which stands for MI user interface. It is nothing but a customized Android ROM. MIUI 7 is the latest version of this operating system. Now it is available for all MI phones, including other mobile brands like Samsung, Sony, HTC, LG, etc.

It has packed with a number of personalization choices along with exciting new functions developed to improve the user experience. There are even new functions that concentrate on maintaining the phone child secured while still enabling some features to be researched by young users. 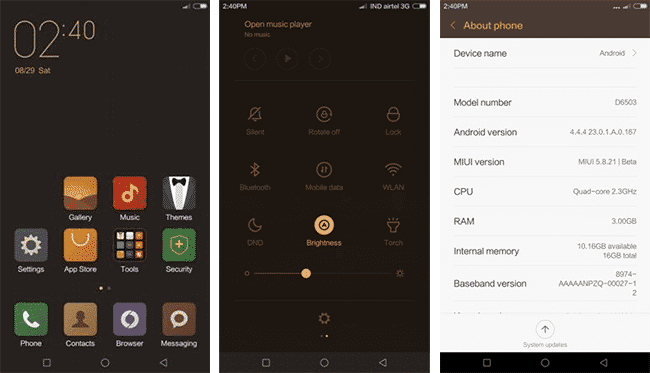 2) Optimized Battery Life: Battery life is a big deal for smartphone users. The MIUI 7 optimizes popular apps to reduce battery utilization by up to 25% which converts to around 3 hours of extra battery life each day.

3) Built-In Data Saver: It has built-in data saver option, which saves your data usage up to 50% and it is not a small deal.

4) Child Mode: It allows the parents to protect their children from sensitive data like texts, emails or any other apps which are not suitable for them.

5) XXL Text: Xiaomi has added XXL Text to the new OS which totally improvements the viewed text to appear in bigger fonts without influencing the other elements in the messaging page.

If you are interested in testing this amazing UI with a lot of customization features on your device then you can easily install it without having a computer. Now MIUI 7 is officially available for SONY Xperia Z1, Z2, and Z3 devices, but you have a rooted phone. To root your device you can follow this tutorial. This tutorial also contains the installation process.

This ROM is based on Android KitKat 4.4.4 and pre-rooted. If you are really interested in trying something new on your phone, then go for it.