Unroot Xperia Z2/Z3 on Lollipop and Marshmallow: SONY Xperia Z2 and Z3 are one of the best Smartphone. Rooting an Android phone, allows you to do more with your phone; like custom ROM installation, System modification, and UI tweaks, CPU and GPU clocking and much more. Before few days, I have shared the procedure to root Xperia Z2/Z3 on Android Lollipop 5.1.1 and Marshmallow; which is the latest version of Android OS. Like every coin root access also has two sides; one is for good and another one is bad. A new user might not understand the root capabilities and break the phone. If you are one of them and want to unroot your Android smartphone, then this tutorial is for you.

A rooted phone can’t be updated or upgraded via OTA. So, you need to unroot it. Marshmallow has been released for these two phones. So, In this tutorial, you’ll learn, how to unroot Xperia Z2/Z3 on Lollipop/Marshmallow 5.0.2, 5.1.1, and 6.0.1. Let’s get started.

If your phone has root privilege, then you must have SuperSU app installed on your phone to grant root permission. In some cases KingRoot takes the place of SuperSU. You need this application in order to unroot any Android smartphone. 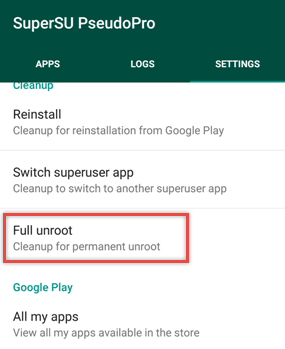 With SuperSU app, it is easy to unroot Xperia Z2/Z3 on Lollipop. If you don’t have the app, then download from PlayStore.
[appbox googleplay appid eu.chainfire.supersu]