Your mobile phone is not a normal phone anymore; it’s a smartphone. You can say it as a digital camera, a gaming device, a music player, a TV and radio, a GPS device, an e-book reader, a file storage device, and much more.

You have a device that can do different tasks like a pro. You always have a metal or plastic piece in our pocket and can’t evade it. Because we don’t know how much we are addicted to the silly box and there is no solution to escape. This happens due to the lake of our willing power.

I am not saying that don’t use a smartphone; it’s necessary. Just try to appreciate that always using a smartphone wastes our time. Phone in our hand can squeeze us to check out the new emails, social media or anything like this on the Internet.

If you are one of them, who wants to turn the smartphone into a to a dumb phone when you are in important work, then this article can help you.

What are the benefits of not having a smartphone? 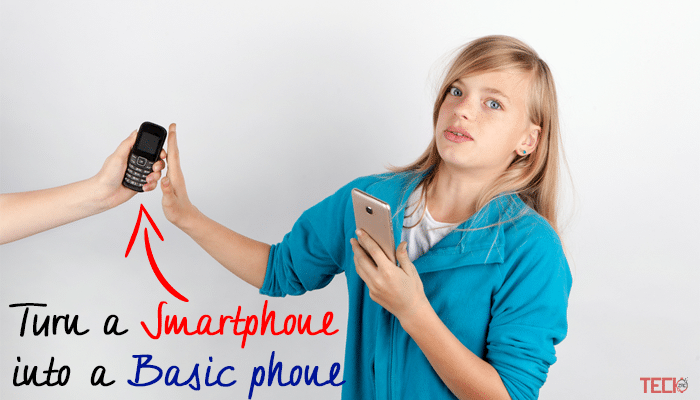 1. If you are a college student then smartphone impacts you more in a bad way than beneficial.

3. You don’t waste your valuable time doing whatever but enjoying with your smartphone.

3. More focus on your work.

5. You will save a lot of money from recharging data packs.

6. You’ll live long and without frustrations.

I think these points are enough to understand the bad impact of having a smartphone. Now, let’s jump to the topic.

How to Turn a Smartphone into a Basic phone

Here I have listed two Android apps, that can convert your smartphone into a simple phone. The first app is for smartphone-addicted people and the second one is for senior citizens.

If you’re hooked on a smartphone and continue looking at it with no specific need, even if you’re outside with friends, Dumbphone is your win-win solution. Dumbphone is a tiny Android app, which can convert your smartphone into a basic phone.

It is possible to disable most of the smartphone functions for a time period, which means you won’t hesitate to look at it and you will have the ability to enjoy viewing your friends in the bar, the character, and the entire world.

That means you can’t use the Smartphone features on your phone. This can help you to make attention with your friends when you are together, or you are in public.

With this app, a user can turn off several functions of their phone for a time interval, from anywhere between an hour to 24 hours.

After starting the app, WI-FI and mobile data will be left for the time period, which you are set in it and you won’t get any notification. When a user tries to open any restricted app like games, social media apps, it shows a pop-up message constantly until you close it.

You can use your phone to make a call, for messaging and also take photos during dumb periods. This might seem like a simple operation for an app, but the distinction is that Dumbphone won’t let you return out quickly and simply changes your linked life returning on when enticement requires over.

There is a three minutes delay interval to convert your phone’s connection returning on, which you can invest twiddling your thumbs or something.

These three minutes is a plus point on it to discourage anyone to turn on. A log is present at the bottom of the app, which shows you how many times you addicted to your phone and forcefully turned it off.

Most of the smartphone makers don’t offer mobile phones optimized for seniors but if you’d like the very best of both worlds, then just purchase a normal Android phone and install Simple Phone Seniors app in it.

This is a free program that can convert any Android “smartphone” to a “basic phone” hiding all of the complexities and applications in the user.

Once set up, the application essentially add a new layer to your own Android cellphone giving rapid access to essential cellphone functions while retaining all of the programs in the background.

This was all about how to turn a smartphone into a basic phone. Download one of these two apps according to your requirements and turn Android into basic phone easily.

If you have any suggestion regarding these apps, then feel free to comment below.

How to Fix Application not found Error in Android

How to Speed Up Chrome Browser on Android Devices

Android M Feature List You are Going to Love