The developers update their apps to extend their features and for the durability. There is no app available on the planet which is just perfect. Every app has some minor and major problems. So, you need to update them while you get a notification on the Play Store.

In order to update all the apps, go to Play Store → My apps & games and tap on “UPDATE ALL” button. That’s it. If you have a free WIFI connection, then it is OK; however, you’ll lose a lot of mobile data if there are many apps in the update list. The update file is much smaller than an original app file, but Google downloads the whole app data to update it.

How to Save Data while Updating Apps on Android?

There is a smart way to save a lot of data while updating your app and that is “Aptoide Lite”. It is a tiny app, which updates your Android apps securely without downloading the extra files. 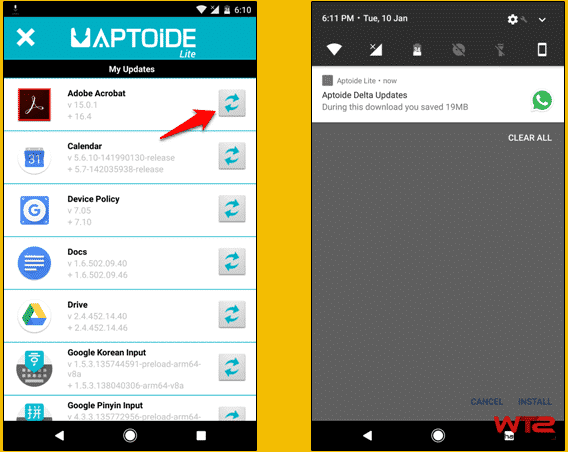 I know most of the people don’t prefer a third-party app to install updates, but believe me, this one is a worth try. This app has an exclusive feature called “Delta Update”. That means you’ll be only downloading the essential parts of the apps during the update. It helps you to save a lot of cellular data, and you get the same thing that Play Store does. Follow this link to download Aptoide Lite.

After you get the .apk file, install it on your smartphone and open it. It’ll show you a message that, the fastest app store in the world. Now, go to the “Updates” to see all the available updates. In order to download a delta update, just tap on the update button along with the app name. Instantly, it’ll start downloading the required files which show in the notification panel. Once it is done, it’ll ask you to install the updates. Now you are ready to go. You’ll also get a notification telling you, how much data you saved.

Not only this, you can also share your updated apps with your friends. To share your apps, simply tap on the “Share Apps” tab and tell your friends to join your group. Your friends should have Aptoide Lite installed on their phones in order to make this thing working.

This was the procedure on how to save data while updating Android apps. Aptoide works on almost all Android smartphones. I have tested it on Android 7.1.1, and it is a must-have app for smartphone users.