System apps help the operating system to perform core level functions; that’s why it is not possible to delete apps on Android that came with the phone. Everyone knows Android mobile operating system is Google’s product, so it comes with some Google apps like Gmail, Google+, Drive, Play Books, Play Movies, Play Games, Maps and much more like this.

Some of them are very useful, and some are not. If you are not using some apps frequently, then they shouldn’t be on your phone. These apps not only eat your internal memory but also run in the background to slow down the phone.

That’s why it is necessary to uninstall system apps on Android. If you have a high-end Smartphone with high memory capacity, then you need not worry regarding this problem.

But a low-end Smartphone comes with a small size internal memory, like 4GB or 8GB, and it creates a problem when you try to install new applications in it.

How to Delete Preinstalled Apps on Android 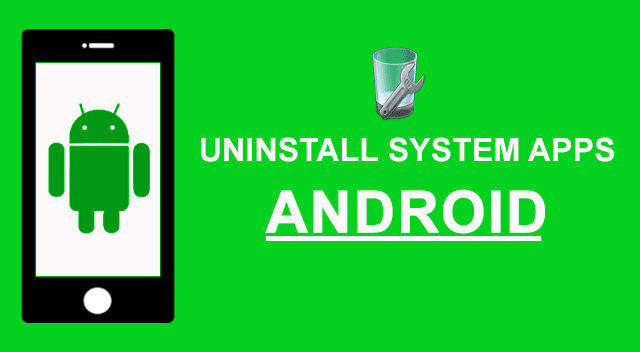 Some smartphone companies also include their own apps except Google apps which are called Bloatware. The problem is many of them also acts as the system apps. That means you can’t remove them.

Bloatware is a big problem that has plagued Android users since its origin. The simple fact that there is not any straight forward way to uninstall those programs makes me mad. Heck, even Apple currently permits you to uninstall its system programs in iOS 10 and 11.

There are two ways to delete factory apps on Android; with root and without root.

There is no way to uninstall preinstalled apps on Android without root permission. If you don’t know what is rooting, then you can check it here. But, you can easily disable system apps; they will no longer display or run on your device. In this way, you can easily increase your phone’s performance and battery life.

Here is the complete tutorial to disable Android apps without uninstalling. Follow the process to freeze a system application. In this way, you can easily disable Google apps as well as the Bloatware.

After disabling a system application, the icon will no longer visible on the app menu. The background process will also be disabled. If the system applications are eating your smartphone’s resources, this is ideal to disable them.

Rooting is the process to get the administrative privilege on your Android phone. If your phone is still not rooted, and you want to root it easily and securely, then follow the Android easy rooting methods.

After getting root access, you can easily remove system apps. Below is the list of some apps to uninstall system apps on Android.

It is a top rated tiny application to easily perform your task. It not only uninstalls system apps but also performs user apps un-installation, move internal apps to SD card and vice versa. On the time of removal, it creates a backup on the trash for no further stability issue.

Like System App Remover, it is also very easy and safe to use. Before removal, you can make a backup for further use. It has an easy to use interface to remove system apps like Camera, Google+, Gmail, Drive and many more.

Yes, you are right. This CCleaner is a product of the same company, which performs computer cleaning tasks like windows PCs. In the App Manager section, you can easily uninstall default system apps like other applications.

There is another app named “Lucky Patcher“, which is also very safe to perform system apps un-installation. But, it is no longer available in Google Play Store. It is one of the best apps for rooted mobile users. Just Google it to download the app.

System apps removal may cause problems, so be careful before performing this task. This is all about how to uninstall system apps on Android without root. Try them, and share your opinion.