The app is more than an unlimited free VPN service. Additionally, you can check and secure your WIFI connection and block ads and ads trackers while browsing. I have tested the ad blocking feature through different browsers, and it’s working pretty well. This feature is very helpful for those people who are always looking for the way to block ads on Android without rooting.

Why should you use a VPN?

VPN or Virtual Private Network is a personal network which is used to secure public networks. It is very useful to keep your personal information like location, IP address safe while using the Internet. Basically, it encrypts your public connection to become anonymous online.

The VPN uses virtual connections routed through the Internet from the business’s private network to the remote site or a person. In case you are sharing an individual file or information with your company, it protects you from being detected by hackers. 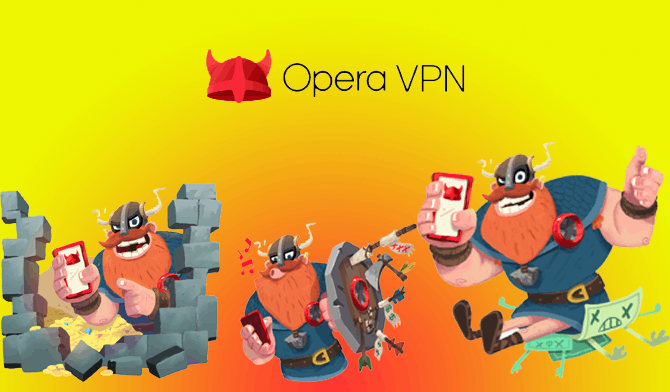 Both of the Android and iOS Opera free unlimited VPN app contains three major features; VPN, WIFI Security, and Guardian. Although, the user interface differs in both of these platforms, but they provide same security and functionality. Well, let’s discuss these premium features.

Opera’s VPN is powered SurfEasy, which the company bought last year. It’s just a regular VPN app, but free and with unlimited traffic. You can choose between five different virtual locations, such as USA, Canada, Germany, Singapore, and The Netherlands. By default, the app automatically connects to the closer location nearby you, but you can switch to a different location if you want.

VPN not only protects you from online but also allows you to access blocked websites in your region. This is only the beginning. Opera said that it would bring more virtual networks in the near future.

It protects you while accessing a public WIFI. Initially, it checks the security level of the connected WIFI, shows you the security risks and gives you a score from A to F. After tapping on the “Protect WIFI” button, it encrypts that connection to protect against threats.

Guardian blocks Ad trackers from following you online. When you enable it, the VPN will be automatically turned on. It disables cookies from tracking your data. Opera browser has an inbuilt ad blocking feature, but using this VPN, you can block ads on other browsers.
[appbox googleplay appid com.opera.vpn]
[appbox appstore appid id1080756781]
What are you waiting for? Download and use Opera free unlimited VPN on your Android or iOS device from the desired store. If you previously downloaded and installed the app on your smartphone, then drop a comment below and tell us how it works.