Now this is in the beta stage which allows the users to control their Android phone completely with their voice commands. Suppose, your phone is not near from you or you have connected your smartphone to your TV and want to operate it with voice commands, then this app could help you to operate all functions without touching your smartphone. As like this, there is also an app, which could lock apps with fingerprint on Android without a fingerprint scanner

Google has been improving its speech-recognition technology from last few years and this is the result in front of you. According to a news, this feature is going to come with the next version of Android operating system. For now, this app only works on Android 5.0 and above devices. Let’s know how the app works and how to control Android phone with voice.

How to Control Android with Voice Commands?

Before going to the procedure, you need the Voice Access app on your Android smartphone. As I said, this is in beta stage, so it is not available for everyone to download from Google play store.

The beta tester program has enough testers, that’s why you need to download it from APKMirror website. 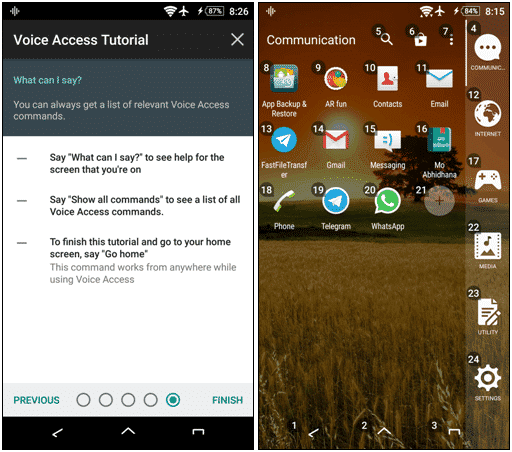 The Voice Access application requires Always On Google Now, which allows your Android system to process voice commands from any screen. Enabling Always On in Google Now requires heading to the Google App, navigating to Settings, then choosing Voice from the left-pane. Then change on From the Google app and Always on. You’ll get a prompt to teach Google Now to identify your voice.

This was the tutorial on how to control Android with voice commands. Voice Access places a number next to each button, toggle, and another interactive part on your mobile screen. You just need to tell the phone about the number and it happens.

It has other commands like “Go home“, “Scroll Down” and “Tap go back“. Anytime you can open the tutorial page by saying “Start Tutorial“. Try this app today and share your experience.